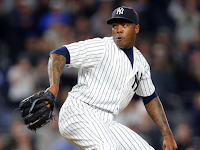 "He's going to be shut down for two weeks and then we'll re-assess. You're probably looking at a minimum of a month if everything goes right," Yankees GM Brian Cashman told MLB.com.

Chapman is known for being able to throw over 100 miles per hour with his fastball consistently. The fastball has helped him grow into a top 3 closer in the league.

Chapman, 29, has a 3.55 ERA in 12.2 innings this year, striking out 21. He has 7 saves. He spent 6 seasons with the Cincinnati Reds, before being traded to the Yankees for Rookie Davis, Eric Jagielo, Tony Renda and Caleb Cotham. He spent part of 2016 with the Yankees, before being traded to the Chicago Cubs for MLB's number 2 prospect, Gleyber Torres, Billy McKinney, Rashad Crawford and Adam Warren. He won the World Series with them last year. During the offseason, Chapman went back to the Yankees, on a 5 year, $86 million deal, the highest a reliever ever received.

To replace Chapman, the Yanks recalled RHP Chad Green from AAA Scranton/Wilks-Barre. Green, 25, was acquired along with Luis Cessa for Justin Wilson not long after Chapman was acquired. He struck out 2 batters in a scoreless inning this year. He has a career 4.63 ERA in 46.2 innings with 54 strikeouts.
Posted by Carter at 2:01 PM