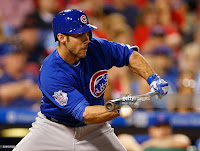 The San Diego Padres have acquired OF Matt Szczur from the Chicago Cubs in exchange for RHP Justin Hancock. Let's get into details.

To make room for LHP Rob Zastryzny on their roster, the Cubs DFA'd Szczur. That means he's likely to be traded, or acquired via waivers. So, they'll take the extra player in Hancock. The 26 year old pitcher has never played in the MLB, after being drafted by the Padres in the 9th round of the 2011 draft. The highest he's played is for the El Paso Chihuahuas (AAA), in 2016 and 2015. This year, he's only played for the San Antonio Missions (AA). He has a 6.23 ERA in 13 innings this year.

The Padres and GM A.J. Preller saw that Szczur was available. He traded a farm pitcher for an MLB quality outfielder. Szczur isn't the strongest hitter. In 4 seasons (all with the Cubs), Szczur hit just .243 in 338 ABs, hitting 8 homers and 40 RBIs, plus 4 steals. He was also a part of the Cubs team last year that won the first World Series in franchise history in 108 years. Szczur's mainly in the MLB because of his fielding. He's played all 3 outfield positions, with 161 putouts, one outfield assist, and exactly 0 errors in 666.1 innings in the field. According to baseball reference, Szczur has a career WAR of -0.6.

To make room for Szczur on their 40 man roster, the Cubs transferred LHP Buddy Baumann to the 60 day DL, after a bike accident in March.