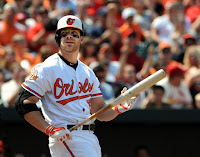 The Baltimore Orioles have placed 1B Chris Davis on the 10-day DL (oblique).

To replace Davis, the O's called up INF David Washington from Norfolk (AAA) for his MLB debut.
Posted by Carter at 4:41 PM