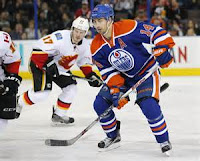 We have our first blockbuster trade since the trade freeze was lifted. This time, it's the New York Islanders acquiring RW Jordan Eberle from the Edmonton Oilers in exchange for C/RW Ryan Strome.

This trade is pretty good for both teams. While Eberle is the better player, he has a cap hit of six million, according to capfriendly.com. Also, he has two more years left, so the Oilers free up some cap room for when centers Connor McDavid and Leon Draisaitl are RFAs. Strome has one more year left of a two year, $5 million deal, so his cap hit is just an affordable $2.5 million. The Oilers are hoping a change of scenery helps him. The Islanders, after trading Mikhail Grabovski to Vegas on Wednesday, had $9 million in cap space. So, they had enough to acquire Eberle and his giant contract. Also, they needed another skilled winger to play alongside captain John Tavares, and Eberle, who played with Tavares in the juniors, works out. He has a rough history with new Isles assistant coach Kelly Buchberger, but that shouldn't be a huge problem.
Posted by Carter at 2:04 PM