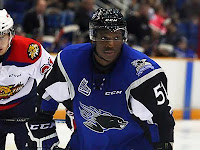 The Los Angeles Kings have acquired forward Bokondji "Boko" Imama from the Tampa Bay Lightning for a (conditional) 2018 7th round pick. The Kings also have signed Imama to an entry level contract (three years).

Imama, 20, scored 41 goals and 55 points in 66 games for the QMJHL winning Saint John Sea Dogs this season. He led them in those categories. He also sat in the penalty box for 105 minutes. The Bolts originally drafted him in the 6th round, 180th overall in the 2015 NHL draft.

If Imama wasn't signed by the Kings by today's deadline, then he would become a UFA and the Kings wouldn't give up the pick.
Posted by Carter at 8:07 PM