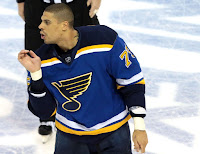 The Pittsburgh Penguins have acquired forward Ryan Reaves and the 51st overall pick in the 2017 NHL draft (second round) from the St. Louis Blues in exchange for forward Oskar Sundqvist and the 31st overall pick (first round) in 2017. The Blues used that pick to select forward Klim Kostin.

Reaves, 30, is known for being a "tough guy". He scored career highs in goals with seven and points with 13 (that's six assists) in 80 games, but had 104 PIMs. He has just 51 career points (27 goals and 24 assists) in 419 NHL games, all for the Blues, but has 695 PIMs. Even though they won the Stanley Cup for the second straight season, GM Jim Rutherford thought they were getting pushed around too much, so he acquired the big, six-foot-one, 225 IB Reaves. A first seems like a fair price to pay since they got the second rounder.

Sundqvist, 23, scored no points in ten games this season. He has four points (one goal and three assists) in 28 career NHL games, all for the Penguins.