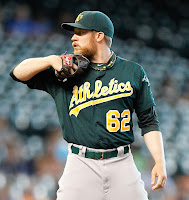 After a long wait, the Washington Nationals have finally addressed their need for bullpen arms, after acquiring LHP Sean Doolittle and RHP Ryan Madson from the Oakland Athletics in exchange for RHP Blake Treinen, 3B Sheldon Neuse and LHP Jesus Luzardo.

It's been awhile since the Nationals had a legitimate closer for at least a year. The past two years, they've acquired closers at the trade deadline. They got Jonathan Papelbon in 2015 and Mark Melancon in 2016, but both Papelbon and Melancon did not return to the team the following season. So, they were looking for more late relievers in 2017 after bullpen struggles earlier in the year. Madson doesn't become a UFA until 2019, and Doolittle doesn't become one until 2021. With Doolittle and Madson, the Nats don't need Treinen. The give up two top 10 prospects in Neuse (6) and Luzardo (10), but not any top five prospects, which is good.

For the A's, the get a solid reliever in Treinen who's just struggling this season, but has had previous success. They also get two solid prospects for an old reliever and a solid reliever, but it's still an ok return.

Both Neuse and Luzardo have never played in the big leagues, but might one day. You never know with prospects.