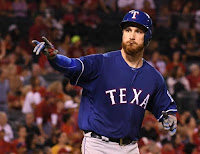 The Colorado Rockies have acquired their catcher, getting Jonathan Lucroy from the Texas Rangers for a player to be named later (PTBNL).

The Rockies, currently in the NL Wild Card, are looking to improve their team. Their catchers, mostly Tony Wolters, are last in the MLB in home runs, and last in the NL in OPS. Lucroy is having a bad year both at the plate and in pitch framing, but still has strong history, and can help the Rox down the stretch. He's also a rental, so he won't block top catching prospect Tom Murphy next year.

As sellers, the Rangers sell a rental, but this is still a disappointment. Last deadline, The Rangers got Lucroy from the Brewers for top prospect Lewis Brinson. Getting just a PTBNL isn't what they could've given up for him last year. A PTBNL could be anyone, even MVP candidate Nolan Arenado (please don't bet on it). But, it's most likely a low leveled prospect.

After the deal, GM Jon Daniels said the following (credit Evan Grant of the Dallas Morning News), "This is an opportunity for (catchers) Robinson Chirinos and Brett Nicholas to play more, and for us to add young talent to the organization We wish Jonathan and his family well in Colorado and thank him for his work here with us."

I think the Rockies win this deal. They get a two time all-star for practically nothing. It's clear they win this trade.

For more on this trade, check out my YouTube video on it
Posted by Carter at 9:56 PM