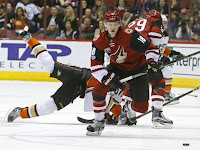 A 70 point finish led to the Arizona Coyotes finishing 6th in the Pacific division, and missing the playoffs once again. But, the youngsters are starting to develop. With new head coach Rick Tocchet, the Coyotes are looking to exit the tough years of the rebuild. While losing franchise icon Shane Doan, GM John Chayka brought in some nice, experienced veterans to lead their team. Here's a quick look at what they did.

Here are my projected forward lines.

The first line is their best two forwards, Domi and Stepan, and Duclair, who can bounce back in year three playing with two stars. The second line is their remaining non-rookie-and-sophomores. The bottom six is just their youngsters. If any of them have a bad training camp, and start in the AHL, or someone gets hurt, Jordan Martinook and Brad Richardson can fill in.

Here are my projected defensive pairs

Chychrun, the 19 year old, plays on his offside here, but gets to play with a top-5 defenseman in the league in "OEL". Goligoski is a top-4 defenseman, but is playing on the third pair because he's left-handed, and not right-handed. Hjalmarsson is a better defenseman, so he gets to play on the top-4. Chychrun also could be out for awhile, so prospect Kyle Wood should replace him. If someone else goes down, Kevin Connaton will probably their replacement.

The Coyotes got significantly better this offseason. As a result, I think they'll improve by eight points to 78 points, but still finish sixth in the Pacific division. Also, I have a wacky prediction that the Coyotes will win the lottery for a top three pick in the 2018 NHL draft.

Also, check out my YouTube season preview here.
Posted by Carter at 1:03 PM