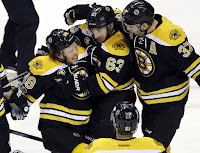 The Boston Bruins surprised some in 2016-17, finishing 3rd in the Atlantic division with 95 points. But, they lost in the first round to the Ottawa Senators. Their offseason was very uneventful, not doing much. But, here's a quick look at what GM Don Sweeney did.

Here are my projected forward lines.

The first line is one of the best in the league. The second line with the two Davids is very potent. The vet third line is solid. Ryan Spooner is very underrated. The 4th line has their sophomores and Forsbaka Karlsson, a 20 year old rookie with just one game of NHL experience, can breakout this year. Danton Heinen, Tim Schaller and Kenny Agostino will be injury replacements.

Here is my projected defensive pairs.

The superstar rookie, McAvoy, gets to play with one of the best leaders in the league in Chara. Krug is another underrated defenseman. Carlo is looking to have a solid sophomore season. The two vets, McQuaid and Miller, are solid third pair defensemen. Paul Postma is their 7th defenseman.

All four of them played in the NHL last year. Rask is an elite goaltender who has been plagued by injuries. Khudobin struggled as a backup last year, and McIntyre and Subban were called up from the AHL to play.

The Bruins' core from last year is still intact, and that team made the playoffs last year. But, with the rest of the Atlantic getting better, it will be tougher for the Bruins to make the playoffs. So, I think they'll miss the playoffs in 2017-18.