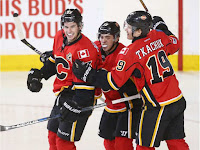 In 2016-17, the Calgary Flames rebounded off a bad 2015-16 and finished 4th in the Pacific division with 94 points, making the playoffs. But, they were swept in the first round by the Anaheim Ducks. Lead by big goaltending changes, the Flames had a solid offseason. Let's look at what GM Brad Treliving did.

Ferland played with Monahan and Gaudreau last year. The second line is pretty good. The kid line with Bennett, who's looking to breakout, like Lazar will go well with the rookie Foo. Versteeg and Brouwer are better than fourth liners, but their team is so good they have to play there. Also, Freddie Hamilton is the extra forward. The Flames might also have interest in signing Jaromir Jagr, so we'll see if they do that.

Everyone besides Kulak is a good top-4 defenseman. In my opinion, this is the second best defensive core in the NHL, behind the Nashville Predators. Matt Bartkowski is their 7th defenceman.

Smith is a solid starter, and Lack is a solid backup. If one of them goes down, top goalie prospect and AHL starter Jon Gillies should get the call.

Prediction
The Flames improved their team a lot in the offseason. This will get them more points in 2017-18, and they will make the playoffs.