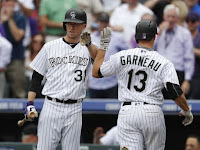 With backup catcher Josh Phegley on the 10-day DL (oblique strain), Garneau could be a solid backup catcher option, or at least a better one than Ryan Lavarnaway, who could be DFA'd soon. Also, Garneau is a right handed hitter, so he could platoon with starting catcher, and left handed hitter Bruce Maxwell, who is having a tough year. Garneau was probably only waived by Colorado because they acquired C Jonathan Lucroy from the Rangers.