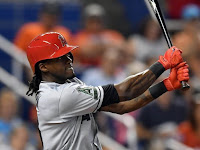 The Houston Astros have claimed OF Cameron Maybin off waivers from the Los Angeles Angels.

With the playoffs looming, the Astros were looking for a solid 4th outfielder. Maybin has good speed, so that is helpful off the bench in the playoffs. Maybin will probably platoon with rookie Derek Fisher, as Fisher is left-handed, and Maybin is right-handed.  He's a
rental, and they get him for practically nothing.

The Angels recently acquired LF Justin Upton, so Maybin was just a 4th outfielder. With getting rid of him, they also get rid of the remainder of his $9 million contract he's owed this year.
Posted by Carter at 4:44 PM