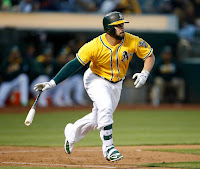 The Seattle Mariners have acquired 1B Yonder Alonso from the Oakland Athletics in exchange for OF prospect Boog Powell.

The Mariners are 1.5 games out of the Wild Card race, and are trying to make the playoffs for the first time since 2001. Alonso is a solid power bat that can platoon with 1B Danny Valencia in Seattle. He's also a rental, so they won't have him next year (most likely).

As sellers, the A's are able to make a waiver trade and get rid of a rental. They get an MLB ready prospect in Powell, who isn't former Orioles star Boog Powell, so that's good. If Powell doesn't play for Oakland this year, He'll probably play next year.

I think this is an even trade. The Mariners get a rental for a young player who's MLB ready. The only thing that stops the Mariners winning is that Alonso is a rental. The only thing stopping the A's from winning is that Powell is a risk, already being suspended in the minors twice, including when he was with the A's organization back in 2014.
Posted by Carter at 1:40 PM