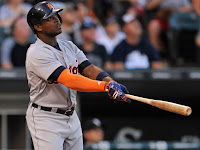 The Los Angeles Angels have acquired LF Justin Upton from the Detroit Tigers in exchange for RHP prospect Grayson Long and a player to be named later (PTBNL) or cash considerations.

Just one game out of the AL Wild card, the Angels are thinking that acquiring Upton could be the extra push they need. Also, Bill Shaikin of the Los Angeles Times noted that since the start of 2015, Angels left fielders have hit just 27 homers, including just seven this season. Upton's 162 game average is 28 homers. Even though he has a big contract, Upton is under contract for four seasons after this year. He can be solid in L.A.

In related news, the Angels awarded their left fielder, a former Tiger, Cameron Maybin to the Houston Astros. Maybin would have been benched with Upton on the team.

The Tigers have been looking to unload lots of salary lately. Former ace Justin Verlander is also on the market, with a $28 million price tag per year. Upton is owed $22 million per year, so trading him is good for the the payroll. The don't get too much, but that's what hurts about having that big of a contract.

I think this is an even trade. The Tigers get a solid prospect, and unload a lot of salary. On the other hand, the Angels get a good player under team control for a few years. So, everybody wins.
Posted by Carter at 4:21 PM