My interview with baseball ballhawk and author Zack Hample 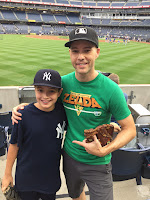 You are watching your favorite team in action on TV. The team's slugger rips one to right field... It's a home run! While you are too busy celebrating the homer, baseball "ballhawk" Zack Hample is also celebrating, for a different reason. The reason? That home run ball is sitting in his glove, a place many home run balls land. Hample is a ballhawk who goes to MLB stadiums, looking to catch baseballs both in batting practice and during the game. Since 1990, Hample has been to 53 different MLB stadiums, snagging over 9,900 baseballs. Also, he's caught approximately 70 game home runs in that 27 year stretch. In 2017, Hample looks to reach a big milestone of 10,000 baseballs all-time. Also, he's caught 100 or more baseballs at many current MLB stadiums. Plus, he's caught many big-time milestone homers, like Mike Trout's first career home run, and Alex Rodriguez's 3,000th hit, which was a homer, before giving them back to the players. To help others catch baseballs, Hample wrote three books in "How to Snag Major League Baseballs", "Watching Baseball Smarter" and "The Baseball".

At a recent Yankees-Mets game, I was able to catch up with Hample to talk about his life as a ballhawk.


Me: "For most people, almost catching a home run ball and being on TV is an amazing experience. For you it's just another day at the office. Does that seem crazy to you?"

Hample: "I guess if I step back and think about it, yeah. Probably most people could go years without even getting close to a home run. But for me, if I go a month without getting close to one, I start to get frustrated. I expect to be close to balls, and it was fun to be involved in that play (meaning an Austin Romine triple he would of caught if it was a home run). If I had reached over and interfered, I would really be involved, but that's not the kind of thing that I would do. Just to be close to the action is what I love about doing this."

M: "Tonight you are seeing a Mets-Yankees game, yesterday a Red Sox-Yankees game. Do you just love seeing these rivalries coming together on the field?"

H: "I do, but I don't. The baseball fan in me loves it, but the baseball collector in me wants to see the Twins and the Rays at Tropicana Field, because nobody will be there, and there's more space for me to move around and catch balls. I'm always conflicted like that. I want to go to the big games because they're exciting, but I personally catch far fewer baseballs."

M: "For you, is it easier to catch a ball on the fly in BP (batting practice), or get a toss-up from the players?"

H: "It's becoming a lot harder for me to get toss-ups, because there is so many kids out here doing this, and the players would always rather throw baseballs to younger people. It depends on the stadium. Some of them are configured very badly for catching home runs, so I will actually focus on toss-ups in those places, so it really just depends."

M: "Which MLB ballpark is your favorite to ballhawk at?"

H: "It was Camden Yards (the Orioles stadium) for a very long time, and I still love the look of that place, and how it's designed and the layout for ballhawking. But security has gotten awfully strict there in the last few years, so that makes it less fun, but I'm still looking forward to getting back there whenever I can."

M: "Do you think that your skills as a kid are helping you now getting almost 10,000 baseballs?"

H: "If you are talking about my skills just being athletics and playing baseball, then definitely. I see people come out here with gloves, and they think that they are in the right spot, and maybe they saw my videos, but they've never tried to catch a fly ball before, and they have no chance. So the fact that I've played baseball my whole life growing up certainly helps."

M: "What's your favorite three balls that you still have possession of?"

H: "Probably a Derek Jeter home run late in his career that was his 254th career home run and his 3262th hit. Another one is a Barry Bonds home run (724th). The third would be the last home run the Met's ever hit at Shea Stadium (Carlos Beltran).