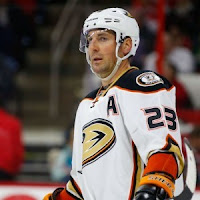 Defenseman Francois Beauchemin and the Anaheim Ducks have agreed to a one year, one million dollar deal, with a $500K performance bonus.

After losing Clayton Stoner and Shea Theodore in the expansion draft, the Ducks could use a 7th defenseman to use if Brandon Montour, Kevin Bieksa, Sami Vatanen, Cam Fowler, Hampus Lindholm or Josh Manson go down with an injury, or at least a better one than Steve Oleksy and Korbinian Holzer. Also, Lindholm and Vatanen could start the season on the IR because they are still recovering from surgery in the offseason. Plus, Holzer and Oleksy could start the year in the AHL if they don't impress in training camp. Beauchemin is a very good defensive defenseman. Also, he's an experienced veteran, playing in 97 career playoff games. This is actually going to be his third different stint with the Ducks, including a 2007 Stanley Cup win, so he knows the system well.