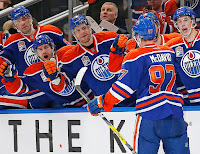 In 2016-17, the Edmonton Oilers finally exited their 10 year rebuild. They finished with 103 points, for 2nd in the Pacific division. Connor McDavid won the Art Ross and Hart, with 100 points. Leon Draisaitl had a great season. But, the Oilers signed McDavid and Draisaitl to new deals, and they had cap issues. The were forced to trade RW Jordan Eberle to the Islanders for Ryan Strome. They bought out Benoit Pouliot, and replaced him with Jussi Jokinen. Let's look at what they fully did this offseason.

The first line showed chemistry last season. The second line is very solid. Lucic and Nugent-Hopkins (especially Nugent-Hopkins) could be traded, and Puljujarvi could start in the AHL, so that might not be a line. Strome is really just a third line center, and Jokinen takes the spot of Pouliot. There is a battle for the 4th line right wing spot, and I think Rattie wins it. Mitch Callahan, Brad Malone, Anton Slepyshev and Liro Pakarinen are also fighting for that spot.

Every defenseman but Gryba are similar skill-wise. But, there is a little edge for some players. The edge is where they are playing. So, the top pairing is slighty better than the second pairing. Matt Benning, Mark Fayne, Dillon Simpson and Ben Betker will be the extra defensemen or in the AHL.

Goaltending
Cam Talbot
Laurent Brossoit
Talbot is a solid starter, and Brossoit is a solid backup. It's simple.

Predictions
I think that McDavid will once again be a Hart finalist. And, once again, the Oilers will be in the playoffs, but this year, be at the top of the Pacific division.