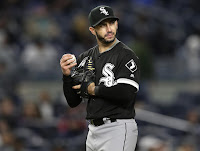 The Rangers are still attempting to get into the wild card. After trading Yu Darvish to the Dodgers, they've needed a starter. Gonzalez is a solid 5th starter. He's a pitch-to-contact guy with an ERA about  4.00, like most 5th starters. He's a solid add.

The White Sox are pure rebuilders. Gonzalez was useless for them, and useful to another team. Getting something for him is good. Forbes isn't the biggest prospect, but he's solid.

I think the Rangers win this trade. They get a major league starter for just a low-leveled prospect. It's simple: they win.
Posted by Carter at 8:52 AM