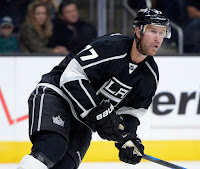 Los Angeles Kings center Jeff Carter is out indefinitely after being cut by the skate of Montreal Canadiens defensemen Jeff Petry in their eventual 5-1 win on Wednesday. The injury will require surgery. To replace him, forward Brooks Laich was signed to a contract.

Losing Carter will be hard for the Kings. An all-star last year, Carter has scored at least 24 goals a season since being traded to Los Angeles in 2012. Rookie Alex Iafallo will get a higher role now. They are depending on some bottom six players to step up. Carter is the center on the famous 70s line featuring Tyler Toffoli and Tanner Pearson.

Laich could be one of two things. He could replace Carter's roster spot and be a depth forward. Or, he could go to the Ontario Reign (AHL), and get called up if another injury strikes. The veteran has a long NHL career, and could help the team chip in a few goals.