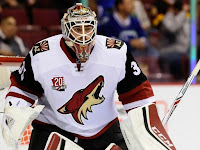 In the last batch of waived players, Arizona Coyotes goalie Louis Domingue and Vegas Golden Knights defenseman Griffin Reinhart were announced available to every team, or they'll go to the AHL.

For Domingue, he's been the second worst goalie in the NHL this year (Antti Niemi is the worst). Also, the Yotes recently acquired Scott Wedgewood from the Devils. Wedgewood is a good backup, and with Antti Raanta returning from injury, Domingue was useless.

Reinhart is a bust, and has just 37 career games. He's most famous for being traded from the New York Islanders to the Edmonton Oilers for the picks that was used on Mat Barzal and the other one was flipped for Anthony Beauvillier. Vegas signed him in the offseason, and with their plethora of defensemen, they don't need Reinhart.

Reinhart, 23, has scored two points, both assists in 37 career games for the Islanders and Oilers.
Posted by Carter at 12:43 PM