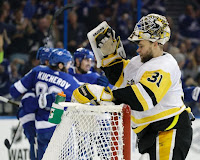 The Pittsburgh Penguins have placed G Antti Niemi on waivers. He is not expected to be claimed.

Niemi was signed to replace Marc-Andre Fleury, who was claimed in the expansion draft. But, he has done the opposite of what Fleury did through three games, and has been one of the worst goalies in the league early on. It's probably why he was bought out by Dallas in the offseason. Sending Niemi doesn't hurt, and it can help him work on mechanics.