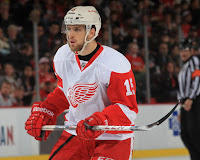 The Pittsburgh Penguins have acquired C Riley Sheahan and a 2018 5th round draft pick from the Detroit Red Wings in exchange for F Scott Wilson and a 2018 3rd round pick.

The Penguins badly need a 3rd line center. Greg McKegg is their current third line center, so you could see why they went out and made this trade. Sheahan's faceoff percentage of 50.6% last year was pretty solid. They only drop back less than two rounds, and that third could be nothing. Sheahan will take Wilson's roster spot, and McKegg will drop back to the 4th line. Sheahan is 25, so that's also a positive.

Sheahan, 25, has no points in eight games this year. In his NHL career, all for the Wings, Sheahan has scored 38 goals and 60 assists for 98 points in 292 games.

For the Wings, things weren't working out for Sheahan last year. He scored just two goals the entire season, in 80 games! As a defenseman, that's okay, but for a forward, that can't happen. Wilson needed a change of scenery, because with the crowded forward core the Pens have, Wilson couldn't do much. Also, after signing RFA Andreas Athanasiou, the Wings needed to unload some cap, and got rid of Riley's $2.075 million hit.

Wilson, also 25, has no points in three games this season. In his NHL career, all for Pittsburgh, Wilson has scored 13 goals and 19 assists for 32 points in 106 games.