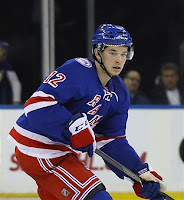 The Detroit Red Wings have acquired F Matt Puempel from the New York Rangers in exchange for D Ryan Sproul.

For the Wings, Puempel is a 4th line-type of player that can net some goals here-and-there. He's going to go to Grand Rapids (AHL), but if there's an injury, Puempel can be called up. The Wings have a surplus of defensemen (though they are all the 7th d-man type). Trading Sproul doesn't hurt when you have Dylan McIlrath, Nick Jensen and Robbie Russo among others to play his exact same role.

Puempel, 24, hasn't played in the NHL this year. In his NHL career for the Rangers and Ottawa Senators, Puempel has scored 10 goals and five assists for 15 points in 79 games.

For the Rangers, they don't need Puempel after claiming Adam Cracknell a few days ago. Sproul still won't start, but he'll have a better role than he had in Detroit. Sproul will go to Hartford of the AHL.

Sproul, 24, also hasn't played in the NHL this year. In his NHL career, only for Detroit, the defenseman has scored a goal and six assists for seven points in 28 games.

I think this is an even trade. Both teams get a depth player, but at different positions. That's why it's an even deal.
Posted by Carter at 6:42 PM