Should we be worried about the Habs? 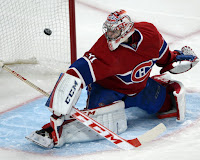 With a 1-6-1 start (three points), the Montreal Canadiens are the league's second worst team, behind only the Arizona Coyotes (0-6-1), who were expected to be bad. But, the Habs won the Atlantic Division last year and were expected to be good this year. That leaves us to their million dollar question in the title: should we be worried about the Canadiens?

No. At least not yet. Every team has bad starts. Plus, they still have 74 games to go. I bet you that they'll have their hot streaks. Even the Colorado Avalanche, who had 48 points last season, had some good runs at some point.


What they really need is some better performances from Carey Price, their goalie who is considered to be the best worldwide. In seven of the Habs eight games, Price has a 3.95 GAA, with a .881 SV%.

But, you also need to take into account how bad their defense has been. Mark Streit was already released. After signing a five year, $4.625 million deal in the offseason, Karl Alzner may be the worst Canadien this season so far, with a -7 rating in eight games. And these are supposed to be his best years, as he's being paid $6 million this year. Rookie Victor Mete has struggled so far, and is a -6. In Tampa, rookie Mikhail Sergachev (who the Habs traded in the offseason for Jonathan Drouin) scored his first NHL goal a couple nights ago and is doing well in his new jersey. Jeff Petry is also a minus seven. The Habs goal differential of -20 is the worst in the league, and is amaing for just eight games.

The only thing to worry about for their team besides Alzner is the fact that center Alex Galchenyuk, who signed a new deal with a $4.9 million cap hit in the offseason, has been mistreated, and placed on the 4th line. As a result, Galchenyuk has just one goal in those eight games.
Posted by Carter at 4:48 PM