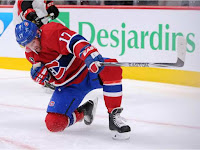 The Los Angeles Kings have acquired forward Torrey Mitchell from the Montreal Canadiens in exchange for a conditional 5th round draft pick in 2018. The condition, per Cap Friendly is that if L.A. makes the playoffs, the Canadiens will receive the 4th round pick they traded to the Kings for Dwight King last trade deadline.

For the Kings, they seem to not be afraid to make early season trades. They already dealt Mike Cammalieri to the Oilers for Jussi Jokinen. They've been looking for centers since Jeff Carter went down with an injury. Marian Gaborik has had injury history, and Alex Iafallo, Michael Amadio and Brooks Laich might not produce, especially since Iafallo and Amadio are rookies. Mitchell is a solid 4th liner.

Mitchell, 32, has no points in 11 games this season. In his NHL career for the Canadiens, Buffalo Sabres, Minnesota Wild and San Jose Sharks, Mitchell has scored 61 goals and 80 assists for 141 points in 617 games.

For the Habs, they have a lot of players on their roster, and solid players like Dan Carr vying for a call-up in the AHL. A trade was bound to come. Trading Mitchell doesn't hurt them.

This is an even trade. The Habs don't need Mitchell, and the Kings don't need the pick. That's why it's an even deal.
Posted by Carter at 6:24 PM