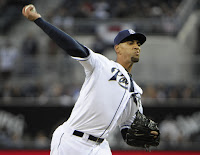 The San Diego Padres have signed RHPs Tyson Ross and Chris Young to minor league deals. Both will challenge for a rotation spot.

The Padres need mad rotation help. By adding Ross and Young, two former Padres, it puts veteran leadership, plus skill. Ross started on opening day for the Padres in 2016, but sustained a season ending injury in the game. Young played from 2006 to 2010 in San Diego.