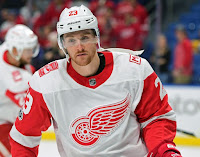 The Buffalo Sabres have acquired forward Scott Wilson from the Detroit Red Wings in exchange for a 2019 5th round pick.

This marks the second time Wilson has been traded this season. He was in the Riley Sheahan trade and went from the Pittsburgh Penguins to Detroit. He's a solid depth forward.

Wilson, 25, has scored no points in 20 games for the Red Wings and Penguins this year. In his NHL career for the two teams, Wilson has scored 13 goals and 19 assists for 32 points in 123 games.

In related news, forward Matt Moulson was placed on waivers by Buffalo.

Moulson, 34, has scored no points in 14 games for the Sabres this year. In his NHL career for the Sabres, New York Islanders, Los Angeles Kings and Minnesota Wild , Moulson has scored 176 goals and 193 assists for 369 points in 650 games.

For the Wings, Wilson was pretty cold for them, not scoring in 17 games. Since he's only a depth forward and is very expandable, they could easily trade him.
Posted by Carter at 3:52 PM