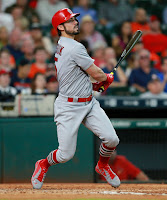 For the second time this offseason, the Toronto Blue Jays have acquired a starting position player from the St. Louis Cardinals. First, it was SS Aledmys Diaz going to the Blue Jays. Now, it's OF Randal Grichuk going north of the border in exchange for RHPs Dominic Leone and Conner Greene.

For the Blue Jays, they lost Jose Bautista and have only added Curtis Granderson. Getting another outfielder really helps the situation. Grichuk, who is known for being the draft pick directly before Mike Trout, isn't a bad player. He has some value and can help Toronto in 2018. They give up a fair price for Grichuk, but it's not as good a deal as the Diaz trade was for them.

For the Cardinals, they already have three outfielders in Marcell Ozuna, Dexter Fowler and Tommy Pham, from left to right. Grichuk is too good to be a fourth outfielder, so trading him was the best option. They like Leone, and will use them as a late reliever.

I think this is an even trade. The Jays get a much needed outfielder, and the Cardinals get some pitchers.
Posted by Carter at 5:47 PM