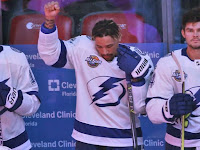 The Tampa Bay Lightning have waived RW J.T. Brown. If he clears waivers Brown will be assigned to the Syracuse Crunch of the AHL.

When asked about the move, GM Steve Yzerman said it was about "creating roster flexibility". Brown isn't having a great 2017-18 on a great Lightning team, so it doesn't come by surprise that he was traded. Brown became famous earlier this season when he raised a fist to protest actions from police officers to African-Americans, like Brown. This protest started by former San Francisco 49ers QB Colin Kaepernick, and has been continued on by many, many NFL players, and Oakland A's catcher Bruce Maxwell.

Brown, 27, has scored one goal and three assists for four points in 24 games this season. In his NHL career, all for the Lightning, Brown has scored 19 goals and 42 assists for 61 points in 286 games.
Posted by Carter at 3:03 PM