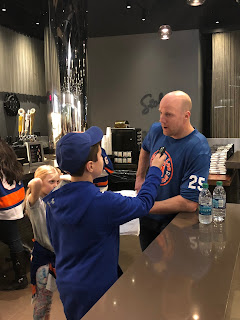 At age 38, new Anaheim Ducks forward Jason Chimera has had a long NHL career. The Edmonton native was drafted by his hometown Oilers in the 1997 NHL draft, 121st overall. He played for the Oilers for parts of four seasons, until a trade including draft picks sent him to the Phoenix Coyotes. The NHL lockout caused him to play in Italy, and Chimera never played in Phoenix since he was traded to Columbus in the Geoff Sanderson trade that included Chimera, Cale Hulse and Mike Rupp going to Columbus for Sanderson and Tim Jackman. Chimera played in parts of five seasons with the Jackets, and was a veteran presence on a line with Derick Brassard, who has had a good career so far, and Jakub Voracek, a player who's had an even better career than Brassard, when they were rookies. Chimera, though. was traded in the middle of the 2009-10 season to the Washington Capitals for Chris Clark and Milan Jurcina. Chimera played in parts of seven seasons for them, and is most known for his time spent in Washington. Before the 2016-17 season, Chimera signed a two year deal with the New York Islanders, but at the deadline of the next season (which is about two days before the day I'm writing this), Chimera was traded to the Anaheim Ducks in exchange for Chris Wagner. Chimera will soon make his Ducks' debut. In his NHL career, Chimera has a grand total of 185 goals and 228 assists for 413 points in an astounding 1,091 games played. During his time with the Islanders, Chimera was a locker room presence. When I asked about the entire team who had the biggest personality on the team, Chimera was the leading vote-getter and one of the two players to get multiple votes (defenseman Johnny Boychuk finished in second place). Also, a quick note. This interview was conducted before his trade to the Ducks, so some of these questions might not be accurate anymore.

Carter LaCorte (me): In your 17th season of a long NHL career, plus free agency approaching, how many more years do you think you can play for?

Jason Chimera: I don't know. Hopefully as long until the kick me out. When you play a sport for a living, it's pretty fun, so I want to keep playing for as long as possible.

CL: You are the oldest player on the team, but the only one to stay healthy in the last two seasons. Do you have any advice to the younger players on how to stay durable?

JC: I think eat well. Maybe get married to a nice women (laughs). She cooks good for me, she's always keeping me in check with the healthy eating.

CL: The team has been very good on offense, but has struggled on defense. How can the forwards help prevent more goals from scoring?

JC: Well, everything's a team [effort]. We need to get back and help out the defense. Everybody starts from the zone out, and that's we have approach it.

CL: What's it like being back here at [teammate] Anders [Lee]' kan jam event?

JC: It's awesome. He's a great guy so we're willing to help him out. He's a loyal guy. It's a great cause too. It was a no-brainer for all of us to help out.

CL: If you could name the next NHL team, in Seattle, what would you name it?