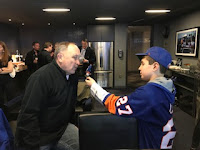 Bryan Trottier established himself as one of the great players in hockey history. He played 18 years in the NHL, the first 15 with the New York Islanders, and the final three with the Pittsburgh Penguins. Trottier won an incredible seven Stanley Cups, four with the Islanders, two with the Penguins and one as an assistant coach with the Colorado Avalanche. Over his career, Trottier won many trophies including the Calder trophy, a Hart trophy, an Art Ross and a Conn Smythe. With a 500-853-1353 stat-line for them, Trottier has many Isles records. Those include games played (1,123), assists (853), points (1,353), goals created (505.4) and plus/minus (470). He finished with over 100 points in a season an astounding six times, including five more seasons where he finished with over one point a game. He centered one of the greatest lines of all-time, nicknamed the Trio Grande, between fellow hall-of-famers Mike Bossy and Clark Gillies. His six cups as a player came with the Islanders in 1980, 1981, 1982 and 1983, plus two more in Pittsburgh in 1991 and 1992. His Stanley Cup as an assistant coach came in 2001 with the Colorado Avalanche. Trottier was also the head coach for the Islanders' rival, the New York Rangers in 2002-03, but was fired after the team had a 21-26-6 record that season. Trottier was inducted into the hockey hall of fame in 1997. In 2001, the Islanders retired his number 19.

At a recent Islander game, I was able to sit down (lies! We were standing!) with Bryan, now 61 years young, to discuss some things on the current Islander team, plus the difference between his playing time and now.

Carter LaCorte (me):  How do you think the game of hockey has changed since you played?

Bryan Trottier: Oh my god, we probably had two good lines, now they have four fast lines, four skating lines. The defense skate, all six defensemen skate real well. The goaltender, the equipment is so much better for them. Plus they have this stick called a one piece hockey stick that are firing rockets now. The technology has caught up to the game. All these things that made the game faster, quicker, plus players are more into nutrition and taking care of themselves.

CL: What do you think of this year's Islander team?

BT: We love 'em. [Mat] Barzal's been a great acquisition. [Jordan] Eberle's really has had a great year, we're really enjoying that. They need to stay healthy, get everybody healthy, and they'll get some damage done.

CL: What do you think of the team moving back to Long Island?

CL: Is there any player on the current day team that reminds you of your playing self?

BT: No. I was very slow. These guys are so fast. I wish I could compare somebody to me, but no, they're all wonderfully skilled players. I was kind of a give-and-go guy. A lot of guys here are one-on-one guys, they got great hand skills, puck skills. It was a different game that I played in back then, so it's hard to tell if one player [is like me]. I wish I played like [John] Tavares, I wished I played like [Mat] Barzal, but those guys are really fast, great skaters, good stick-handlers, shooters, scorers. I was just a plunky little centerman.
Posted by Carter at 4:31 PM