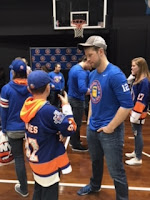 There are two types of points in the NHL. One is goals. The other is assists. Most kids want to be the one who scores all the goals. But, New York Islanders right winger Josh Bailey is that one guy who racks up the assists. In 2017-18, Bailey has scored 47 assists, making up just over 75.8 percent of his points in the season (he has 15 goals and 62 points). In his career, he has scored 121 goals and 247 assists for 36 points in 696 games. He has only played in the NHL for the New York Islanders. The 28 year old Bowmansville, Canada, native was drafted by the Isles in the first round (ninth overall) in 2008 NHL draft. He made his NHL debut the next year, at age 19. In 2017-18, Bailey made the all-star team for the first time, alongside teammate John Tavares. He's also tied with Sidney Crosby for 5th in the NHL in assists with his 47.

At linemate Anders Lee's kancer jam, I was able to speak to Josh on his future, plus the Islander team.

Carter LaCorte (me): What was it like to be named to your first all-star game this season?

Josh Bailey: It was great. It was a lot of fun. I really enjoyed it, spending time with my family, and hanging out with Johnny [Tavares] was nice too. It was a great experience.

CL: Have you always prioritized assists over goals?

JB: Yeah, I've always been that type of player, even when I was younger, I was more of a pass first kind of guy.

CL: Why do you think you have been more successful this year than the in your previous seasons?

JB: I've been giving a lot of opportunities to play with great players every shift, and play with Johnny [Tavares] and Anders [Lee] and on the first power play unit. It's a combo of both.

CL: Every single press member has talked about John Tavares and his contract situation, but not yours. Has there been any talks with the front office on an extension.

JB: We've talked a little bit. We've decided to keep it behind closed doors. I'm hopeful that we'll get something worked out here.

CL: What's it like to be back here and Anders' second kan jam?

JB: It's a lot of fun. We enjoyed it last year, it's for a great cause.

CL: If you could name the NHL's next team in Seattle, what would you name it?

JB: I haven't thought about it. I'll leave that up to the new owners to pick the name.

CL: What makes their personality so big?

JB: They're both really outgoing, they're fun guys, and they always find good things to say. They're good all-around people.
Posted by Carter at 5:37 PM