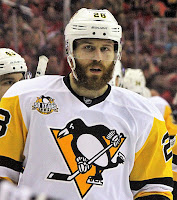 The Columbus Blue Jackets have acquired defenseman Ian Cole from the Ottawa Senators in exchange for a 2020 third round draft pick and forward Nick Moutrey.

For the Blue Jackets, they weren't necessarily in the market for a defenseman, but, they have been shopping rental Jack Johnson, and this trade could signal a Johnson trade. The Ducks have made a push for Johnson, so that is probably the reason behind this trade. Oh, and Columbus GM Jarmo Kekalainen drafted Cole when he was with St. Louis.

For the Sens, they got Cole in the Derick Brassard trade with the sole intention of flipping him. They get their expected third round pick, plus Moutrey, an AHLer.

Moutrey, 22, has scored three goals and three assists for six points in 22 games this season for the Cleveland Monsters of the AHL.

I think this is an even trade. The Blue Jackets get their defenseman, and the Sens continue to pile up on picks.
Posted by Carter at 10:39 AM