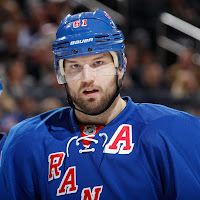 In a six piece deal, the Boston Bruins acquired forward Rick Nash from the New York Rangers in exchange for defenseman Ryan Lindgren, forwards Ryan Spooner and Matt Beleskey, plus a 2018 1st round pick and a 2019 7th.

The Bruins are near the top in a tight Eastern Conference playoff race. They are also pushing to beat the Tampa Bay Lightning and Toronto Maple Leafs to win the President's trophy. Acquiring Nash, a former 40 goal scorer, will help. They give up a little too much, but I think Nash's services will help them a lot.

The Rangers have been selling off their rentals, including Nick Holden, Michael Grabner, now Nash. In return, they get Spooner, a second or third line center, Beleskey, a winger with a big cap hit, but can play bottom six for them, Lindgren, a good prospect, and a 1st round pick. The 7th probably won't turn out to be anything, but it could.

Lindgren, 20, has scored two goals and five assists for seven points in 33 games for the University of Minnesota this season.

I think the Rangers win this trade. Nash isn't a superstar anymore. And yes, he's a good player, but he isn't worth that much. The Bruins could've traded less to get Nash.
Posted by Carter at 10:21 AM