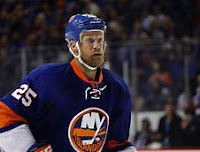 The Anaheim Ducks have acquired forward Jason Chimera from the New York Islanders in exchange for forward Chris Wagner.

For the Ducks, Chimera is a veteran, and is also a rental, like Wagner. He has a bigger cap hit, but a better career. Both players are very similar, fourth line players, penalty killers, but I think experience is the reason behind this trade for Anaheim.

Chimera, 38, has scored two goals and nine assists for 11 points for the Islanders this season in 58 games. In his NHL career for the Isles, Washington Capitals, Columbus Blue Jackets and Edmonton Oilers, Chimera has scored 185 goals and 228 assists for 413 points in 1,091 games.

For the Isles, they free up just under $2 million in cap space, and get a big hitter (212 hits this year). Wagner is a rental, and will take up Chimera’s roster spot.

Wagner, 26, six goals and nine assists for 15 points in 64 games for the Ducks this year. In his NHL career for Anaheim and Colorado Avalanche, Wagner has scored 16 goals and 12 assists for 28 points in 159 games.

I think this is an even trade. Even though Chimera is over 10 years older than Wagner, they are both rentals, and have similar stats. I think Wagner has a little more upside, and Chimera has a better history.
Posted by Carter at 2:47 PM