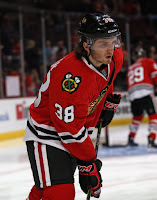 In a surprisingly big deal, the Nashville Predators acquired forward Ryan Hartman and a 2018 5th round draft pick for a 2018 1st, a 2018 4th and prospect Victor Edjsell.

The Preds are in a must win situation, and I guess this will fit the bill. Hartman is a young winger who can score, and played alongside Jonathan Toews, but I'm not sure this is a good deal for them. A 1st and a prospect is a little too much for him.

For the Hawks, they are actually sellers this year, and Hartman is a good place to start, especially when that's your return. Edjsell, a Swedish prospect, has some potential.

I think the Hawks win this deal. While Hartman is a good player, and would be worth Edjsell straight up, adding in a 1st doesn't make too much sense. The Preds must think very highly of Hartman, though.
Posted by Carter at 12:30 PM