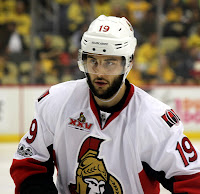 If you saw a post with a similar title, it has been taken down from this site. Nothing was wrong with the article, there was way more information to include. So, this is a whole new writing, no copy and paste, nothing. Okay, let's into the post.

In a three team deal, the Pittsburgh Penguins acquired center Derick Brassard, a 2018 3rd round pick and prospect Vincent Dunn from the Ottawa Senators, as well as prospect Tobias Lindberg from the Vegas Golden Knights. The Golden Knights acquired a 2018 4th from the Penguins, as well as forward Ryan Reaves. The Sens acquired a 2018 1st round pick, a 2019 third, prospect Filip Gustavsson and defenseman Ian Cole. Vegas is paying 40% of Brassard's contract.

For the Penguins, they get a third line center, something they've been missing since Nick Bonino left for Nashville this past offseason. But, Brassard can put up 20 goals, better than most 3rd line centers. They also get him for another year after this. They traded all the things Vegas and Ottawa got, but since a 3rd and two prospects were thrown in, it's worth it.

Dunn, 22, can be easily confused with Blues defenseman Vince Dunn (trust me, I got confused). He has scored four points, all assists in 17 games in the AHL this year.

Lindberg, also 22, hasn't played in the NHL this year, but in his career for the Toronto Maple Leafs, Lindberg has scored two points, both assists, in six games.

For the Knights, this really isn't their trade. They are just in it to resolve some cap issues. They get a fourth liner and a fourth rounder for a prospect stuck in a logjam for the second time in his career. Pittsburgh doesn't have as big of a jam.

I think the the Sens and Penguins both win this trade, and the Knights lose because they are just adding cap for nothing, Ryan Reaves is just more cap added, and they gave up to do that. The Sens got really good rebuilding chips, and the Penguins got a really good player, plus some prospects.
Posted by Carter at 10:02 PM