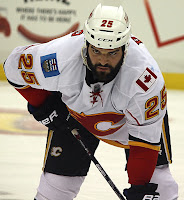 The Nashville Predators have acquired forward Brandon Bollig and goalie Troy Grosenick from the San Jose Sharks in exchange for a 6th round draft pick.

For the Preds, they get Grosenick, an AHL goalie to help with their organizational depth there. Plus, there isn't a big goalie trade market, so trying to grow their own goaltender isn't a bad alternative. I don't get the Bollig acquisition too much, but it seems like more of the same: depth. A sixth is nothing for two players.

Bollig, 31, hasn't played in the NHL this year. In his career for the Calgary Flames and Chicago Blackhawks, Bollig has scored 10 goals and 13 assists for 23 points in 241 games.

For the Sharks, they get rid of two AHLers that they didn't need. They only get a sixth, but like I said, it's a dump off.

There is just one word to sum up this trade: why? It doesn't make too much sense for either team. Maybe it's setting up another deal for San Jose to come. That's all I can think of.
Posted by Carter at 4:30 PM