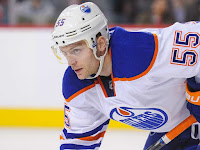 The Nashville Predators have acquired center Mark Letestu from the Edmonton Oilers in exchange for forward Pontus Aberg. Surprisingly, Letestu was soon flipped to the Columbus Blue Jackets in exchange for a 4th round draft pick.

For the Oilers, they are trying to sell their rentals, like Letestu. They traded Brandon Davidson to the Islanders (don't get me started on that trade) and are shopping Patrick Maroon. They get a pretty good prospect in Aberg.

For the Preds, I don't get this trade. If they could get Aberg for Letestu, but not Letestu for a 4th, why would they do Aberg for a 4th? It's weird, unless they were just trying to clear up a roster space for another trade, but then they would've gotten Letestu involved. It's okay if you don't understand what I'm saying.

For the Blue Jackets, they get Letestu, who was their fourth line center and assistant captain a few years ago, before leaving for Edmonton. He is a solid player, and they know it.

For the trade grading process, I'm going to grade it like it's a three team deal. I think the Blue Jackets win this deal. They get a solid player, who's a rental, for just a 4th round pick. Then, the Oilers. They get a solid player with some potential still for a vet that they had just two months left of him. Then, it's the Preds. Aberg isn't anything special, but they could've gotten something better than a fourth for him.
Posted by Carter at 2:46 PM