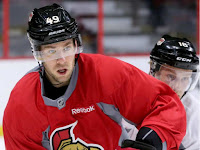 The Ottawa Senators have acquired D Ville Pokka from the Chicago Blackhawks in exchange for F Chris DiDomenico.

The Senators waived DiDomenico right before acquiring Marian Gaborik and Nick Shore from the Kings. They only gave up one forward for them, Nate Thompson, so they would need to send a forward down, for a defenseman, as they also traded Dion Phaneuf in that deal. Pokka is the defenseman they needed, and DiDomenico is the forward they need to send down. He wasn't claimed when they waived him, so now DiDomenico can go to the AHL.

Pokka, 23, hasn't played in the NHL in his career. He was acquired by the Blackhawks from the New York Islanders in the Nick Leddy trade. In Rockford (AHL) this year, Pokka has scored 22 points (four goals and 18 assists) in 46 games

For the Hawks, it seems like they are always adding depth forwards. This trade is another one. DiDomenico won't get too much playing time, but he'll get some.

DiDomenico, 28, has scored six goals and four assists for 10 points in 24 games this season. In his NHL career, all in Ottawa, DiDomenico has those 10 points in 27 games.