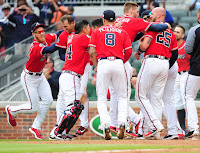 In one of the worst divisions in baseball, minus the Washington Nationals, the Atlanta Braves finished 72-90, once again disappointing their fans. Even though superstar 1B Freddie Freeman showed MVP potential in the start of the season, an injury kept him out for the middle of the year. With Ronald Acuna and Ozzie Albies expected to get extended playing time, the Braves have a developing year ahead of them. Let's take a look at their offseason.

What they did well: They unloaded the Kemp contract, but took on Kazmir's and Adrian Gonzalez (who was DFA'd)'s deals. The trade frees up more money for the future, but tighter on them now, when they don't need it as much.

What they didn't do well: Their outgoing players, Kemp, Phillips and Garcia, weren't replaced by anyone. That means they are leaving it to the young guys, Acuna, Albies and Johan Camargo to get it done. I'm surprised they didn't add a vet like Chase Utley to back up Camargo and Albies, plus a Jarrod Dyson or Rajai Davis to play, since Acuna will probably miss the first six weeks (thus is why he isn't on the projected roster below) so they can keep a year of arbitration on him.

Sneaky Sleeper: He may not even be starting on opening day, with a battle between him and Kurt Suzuki going on, but Tyler Flowers quietly had a fine 2017. In just 346 at bats, Flowers hit 14 homers, pretty good for a catcher. If given the starting job, Flowers could challenge twenty homers.

Incoming outbreak: There's two 21 year olds I considered putting here, so I'll put them both. As their second baseman, Ozzie Albies was decent as a 20 year old in a short 2017 stint. He hit .286 and stole eight bases in 244 Plate Appearances. One of two young guns expected to make the rotation, Luiz Gohara wasn't as good as Albies in 2017, with a 4.91 ERA in 29.1 innings. More innings, and Gohara will succeed.

Unsuspected slump: In his career, Nick Markakis has always been an iron man, playing in 1,839 games in his 11 year career. He played 147 games in his rookie year, and that is still the lowest amount of games he's ever played in. Plus, he's always had a good batting average, with the career mark standing at .288. But, he's lost his power. Most players also lose their ability to keep a high batting average as they age. Markakis might be one of those players this year.

Astounding ace: Despite a rough 2017 where he had a 4.49 ERA, and was a disappointment to my fantasy team, Julio Teheran is still their best starter by far. He has pitched at least 185 innings in each of the last five seasons. Not many starters can boast of that. He still has a career 3.59 ERA, after an ugly year.

Here is the Braves projected roster, starting with their lineup.

Finally, for my prediction, I think the Braves, a team on the rise, will not make the playoffs in 2018.
Posted by Carter at 8:08 PM