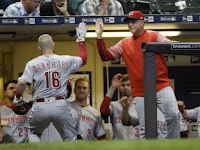 In 2017, the Cincinnati Reds had yet another bad season, finishing last in the NL Central with a 68-94 record. Since they are in the middle of their rebuild, they didn't make too many moves. Let's take a look at their offseason.

What they did bad: They didn't trade Zack Cozart at the deadline, or sign him. That's kind of awkward for a rebuilding team to do.

Sneaky sleeper: One of the best defensive catchers in the league, Tucker Barnhart had a productive year at the plate, hitting .270 and seven homers, plus 44 RBIs in 423 Plate Appearances. For a catcher, that's decent.

Incoming outbreak: With Adleman and Feldman, their top two inning eaters gone, a big chance to break out in 2018 was given to Luis Castillo. In his rookie 2017 campaign, Castillo pitched in 89.1 innings, striking out 98 and maintaining a solid 3.12 ERA. 2018 Is Castillo's time to shine.

Unsuspected slump: Though he continued his trend of getting one more stolen base each year, Billy Hamilton's OBP fell below .300, and he struck out 133 times. He is a stolen base guy, and could reach 60 this year, but I wouldn't keep my expectations for him high, especially if he struggles to get on base.

Blue-chip Bopper: Entering his age 34 season, Joey Votto hasn't showed signs of slowing down anytime soon. He led the league in walks for the 5th time, and in OBP for his 6th time, with a .454 average. By far, he's their best player.

Astounding ace: In his first season as closer, Raisel Iglesias had another good year, with a 2.49 ERA and 92 strikeouts. At just 28 everything is pointing him for Iglesias.

Here is the projected Reds roster, starting with their lineup.

Here's is their projected rotation (I decided that they could go with a 6-man rotation).

For my prediction, I think the Reds, a rebuilding team, will not make the playoffs in 2018.
Posted by Carter at 5:22 PM