My interview with Isles Jordan Eberle 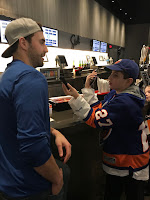 This past offseason, the New York Islanders needed another star player in their lineup. They needed a winger who could score. So, they traded for Edmonton Oilers winger Jordan Eberle. But first, let's back up a little bit. Eberle, a now 27 year old Regina native, was drafted 22nd overall by the Oilers in the 2008 NHL draft. In the World Junior Championships, he played with Isles superstar John Tavares. Eberle had a very good career in Edmonton, scoring 165 goals and 217 assists for 382 points in 507 games. He reached 20 goals five times, and 30 once. As the Isles needed a winger, they acquired Eberle from the Oilers in exchange for Ryan Strome. In his first year in New York, Eberle has scored 22 goals and 24 assists for 46 points in 64 games. In total, that's an NHL career of 187 goals and 241 assists for 428 points in 571 games.

At teammate Anders Lee's kan jam event, I was able to talk with Jordan about getting the trade rumors past him, the team and more.

Carter LaCorte (me): After being rumored in trade talks for over a year, what was it like for that to finally end this summer?

Jordan Eberle: Yeah, for sure. I think with social media and everything being out and the open now, your name gets thrown around. I was excited to get traded to Long Island, and get a new opportunity and put that all behind me and start fresh.

CL: You are the only one to play with Connor McDavid and Mat Barzal in the NHL. Is there any similarities in their game.

JE: They are both very exceptional skaters. Connor [McDavid]'s breakaway speed surpasses anyone in the league. [Mat] Barzal, right to left he's one of the top in the league. Coming out of junior, Connor was highly touted, probably a lot more than Mat. Mat's done very well this year. I think he's got a lot more to go.

CL: Who do you think would win in a race between them?

JE: That's a great question. I think I still have to go with Connor. Just because Mat's head is pretty big so I don't want to make it too big.

CL: You seemed to struggle in your final year in Edmonton, but have played much better this season. Was that because of a change of scenery or a change in your game?

JE: I think I've had a lot more confidence playing here. I love playing here, I enjoy it. It's a fresh start, that's for sure. I think with the struggles last year and not playing and not the best [season]. I still had an okay production season, I scored 20 goals and 50 points but I consider myself a lot better than that. I've enjoyed playing hockey here a little more.

CL: The team has been outstanding on offense but has struggled on defense. How can the forwards help prevent more goals from scoring?

JE: I think we can do a better job blocking shots, for sure. We've struggled getting in [shooting] lanes, and have been giving up too many shots. It's that simple. That for sure and making right decisions and not turning pucks over.

CL: What's it like being here at Anders' kancer jam?

JE: It's a new experience for me. I'm pretty excited. It's always great when you can mix fans in with something like this.

CL: If the NHL expands, and you could name the new team, what would you name it?

JE: First of all, I don't know where it would expand or what name. I probably would'nt of named the Vegas team the Golden Knights, but they've done well so far.
Posted by Carter at 9:03 PM