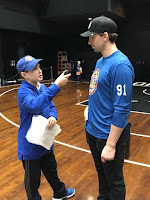 Most 1st overall picks are superstars. The New York Islanders owned the 1st pick in the 2009 draft, and chose the right player. Now their captain, John Tavares has been amazing since being drafted. The now 27 year old Mississauga native has scored 31 goals and 38 assists for 69 points in 69 games. In his NHL career, all with the Islanders, Tavares has scored 266 goals and 340 assists for 606 points in 656 games. Just this past Sunday, Tavares passed John Tonelli for 5th on the Islanders all-time assists list, with his 340. The top 4? They are Bryan Trottier, Denis Potvin, Clark Gillies and Mike Bossy, who all have their numbers retired by the team. Tavares' 91 will be retired soon after he retires. Still the centerpiece of the team, Tavares' contract is up after this season, and he hasn't come close to signing a extension yet, creating lots of media speculation.

At teammate Anders Lee's kancer jam, I was able to talk to John about the future and more.

Carter LaCorte (me): What do you think it will be like playing in two arenas next season?

John Tavares: It'll be different, but two arenas, I've played in before, obviously. I think it will be pretty familiar to be back at the Colisuem soon.

CL: You just played in your fifth all-star game. Does the weekend ever get old?

JT: No. When you're named an all-star you are having a good season. It's great to be organized with that group of players there. To grow up hoping for that opportunity, it's great to be there.

CL: What's it like being back here at Anders' second kan jam?

JT: It's great. People are raising a lot of money for a great cause. He's a great guy and a great teammate, so I'm happy to support him.

CL: If you could name the NHL team in Seattle, what would you name it?

JT: I have no idea. I would think it would have to do with something with the area. Like how the Islanders became the Islanders.