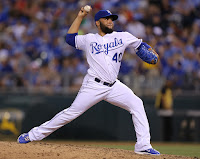 The Washington Nationals have acquired RHP Kelvin Herrera from the Kansas City Royals in exchange for 3B Kelvin Gutierrez, OF Blake Perkins and RHP Yohanse Morel.

For the Nats, they are once again in the playoff race, but the Braves and Phillies are pressuring them this year. They once again need a reliever, and Herrera should be a good fit. He is coming off a rough 2017, but is having a spectacular 2018. Sean Doolittle will probably remain Nats closer, and Herrera will be the set-up man. The prospects they give up aren't spectacular because he is a rental, but still pretty good.

For the Royals, they are rebuilding, after losing Eric Hosmer and Lorenzo Cain in free agency and trading Jon Jay to the D-Backs. Herrera is a rental, and would have no influence on the Royals future. They get three prospects, including the Nationals' 10th and 11th best prospects in Gutierrez and Perkins.