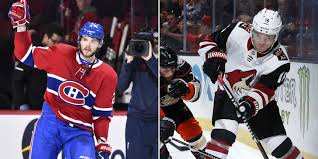 The Arizona Coyotes have acquired center Alex Galchenyuk from the Montreal Canadiens in exchange for forward Max Domi.

For the Coyotes, Galchenyuk has just missed 20 goals in two consecutive seasons, scoring 19 this year with 51 points. But in in 2015-16, Galchenyuk scored 30 goals, just six under Domi's career totals. He is also locked up, at $4.9 million. Arizona could be good within three seasons, and Galchenyuk could be a key top six center for them.

For the Canadiens, they save some cap space with this trade. Galchenyuk has a $4.9 million cap hit, and Domi is currently an RFA. He might sign a bridge deal, but even if he signs long term, he will likely get less than $4.9 million. Domi doesn't have as good career numbers as Galchenyuk, but is a year younger, and could have more control, depending on the contract he signs with the Habs.

I think the Coyotes win this trade. Galchenyuk has better career numbers than Domi, is locked up, has a pretty low cap hit, and is just a year older than Domi. That's why they win this trade.
Posted by Carter at 11:08 PM