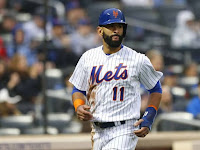 The Philadelphia Phillies have acquired OF Jose Bautista from the New York Mets in exchange for cash or a player to be named later (PTBNL).

For the Mets, Bautista was signed mid-season after being released by the Braves. So, he has a salary at league minimum. Bautista, a former all-star, wouldn't have a spot on the team, as Brandon Nimmo is returning from the DL. Also, there is no reason to have him on the team, as the team is bad, and he is just taking away time from younger players.

For the Phillies, they are in the playoff run, and as a national league team, Bautista can be used to pinch hit for the pitcher down the stretch. He's also a good veteran to have on the team. They give up practically nothing for him, and pay him practically nothing, so they can't lose.

Bautista, 37, has a .196 batting average, 11 homers, 42 RBIs and two steals in 342 Plate Appearances for the Mets and Atlanta Braves this season. In his MLB career for the Mets, Braves, Toronto Blue Jays, Pittsburgh Pirates, Baltimore Orioles, Kansas City Royals, and Tampa Bay Devil Rays, Bautista has a batting average of .247, with 342 homers, 969 RBIs and 56 stolen bases in 7167 Plate Appearances.
Posted by Carter at 2:38 PM