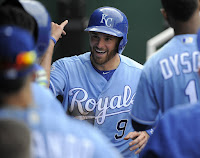 The Colorado Rockies have acquired C Drew Butera from the Kansas City Royals in exchange for LHP Jerry Vasto.

For the Rockies, Chris Iannetta and Tony Wolters aren't really the best catching tandem. Butera isn't having a great season, but is a decent backup catcher. I think he can fight with Tony Wolters down the stretch for a spot on the playoff roster, assuming they get there.

For the Royals, with Salvador Perez as their starter and Cam Gallagher as their backup, they don't need Butera. They get a prospect for him, better than I'd expect.

Vasto, 26, let up three runs with a strikeout in .2 innings for the Rockies earlier this season, his only MLB appearance. He might be a September call-up for the Royals.
Posted by Carter at 5:46 PM