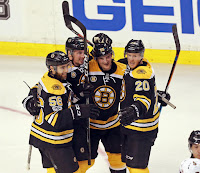 Consistency has been pretty big for the Boston Bruins in the 2010s. They've eclipsed 90 points every year. They've won a Presidents trophy (2013-14), They've appeared in two Stanley Cup finals in 2011 and 2013, and they won it all in 2011. Patrice Bergeron, Brad Marchand, Zdeno Chara and Tuuka Rask are still there, but there is a crop of new Bruins ready to take the reigns. First, let's look at some fast facts for the Boston Bruins.

Forwards: Even though he played in just 68 games, the pesky Brad Marchand scored 85 points in a great season. At age 21, David Pastrnak added 80 points. Patrice Bergeron had 63 points in 64 games. At ages 21 and 20 respectively, Danton Heinen and Jake DeBrusk combined for 90 points. David Krejci and David Backes missed a lot of games, combining for just 77 points. Ryan Donato scored nine points, including five goals in 12 games after returning from the Olympics. Him and top prospect Jakob Forsbacka Karlsson are expected to have good seasons on the third line, but they'll have to make the team first. Joakim Nordstrom and Chris Wagner, the two offense additions, are fourth liners who will be healthy scratches a lot.

Defenseman: After scoring nearly 60 points, Torey Krug showed why he is a top 20 blueliner in the league. Charlie McAvoy produced a solid rookie season, with 32 points in 62 games. Now over 40, Zdeno Chara is aging, but is still playing top 2 minutes for them. John Moore is an addition they didn't need, as Matt Grzelcyk is pushed out of the lineup.

Goalies: With a .917 SV% and 2.36, Tuuka Rask is not exactly elite. But, he is still above average among the other starting goaltenders. After starting with the Islanders, Jaroslav Halak is now settling into a backup role with the Bruins.

Playoffs: Yes
Division spot: 2nd
I think the Bruins will be eliminated in the second round of the playoffs.
Posted by Carter at 6:42 PM